Not only does jazz have immensely long roots in India, those roots stretch all the way into Bihar’s Munger district in the 1930s.

This is something I discovered when I received a message a little while ago from Robert Evangelista, a retired electronics professional who now lives in the US, asking if I knew anything about Filipino bands that played in India in the 1920s. His father, Joaquin “Ivan” Evangelista, pictured above, was a violinist from Candaba town in the Pampanga province of the Philippines. He was part of a band that had arrived in India in 1924 and stayed in the country until just past Independence.

In the 1920s, Robert Evaneglista said, his father was a part of a community of about 20 Filipino musicians were performing in India. They “played all over, wherever they could get gigs”, he said. After a stint in Mussoorie between 1931 and 1935, Ivan Evangelista came to Bombay. It’s likely that he was part of the Filipino Syncomusic Orchestra which performed at several places in the city that year, including at an event to raise money for the Mayor of Bombay’s Quetta Relief Fund.  The Filipinos “supplied a riot of rhythm, coaxing snappy harmonies from their varied collections of instruments”, reported the Times of India.

The Italians of the East

In the 1920s, a historical sketch of Goan migrants in Bombay boasted that the community was known as the Italians of the East. Because of their training in Western music in parochial schools established by the Portuguese who ruled their home territory, many Goans in British India made their living playing Western music in orchestras established by colonial administrators and maharajahs, in marching bands and in ensembles that accompanied silent films, displaying a talent for musicality presumed to exist only in operatic Italy. But, with Robert Evangelista’s message, I realised that the citizens the Philippines, another Asian country with a similarly lengthy history of European colonialism, also imagined themselves to be Asian Italians.

The Philippines came under Spanish influence in 1565, just 55 years after the Portuguese captured Goa. Filipinos soon began to travel to Spain’s territories in the so-called New World. In 1763, the Spanish acquired a new territory in North America and, in the following years, several Filipinos are thought to have settled in New Orleans. In the early years of the twentieth century, when New Orleans became the birthplace of jazz, Filipinos there are said to have taken the new sound back to the Philippines. By then, their country was already under the sway of American popular culture: the Philippines had become a US protectorate in 1898 after the Spanish-American war and only won independence in 1946.

Like the Goans, the Filipinos took quickly to Western music. In 1913, advertisements in the Indian press by the Pacific Mail shipping line listed the attractions of its Europe-bound vessels: individual electric light and fan on each berth, a swimming tank and a Filipino string band. In 1922, a report in The New York Times noted that Filipino orchestras “are the interpreters of jazz on the Pacific Ocean liners”. Echoing the description found in the Goan community history, the Times writer said, “Where music is concerned, the Filipinos are known as the Italians of the East.” 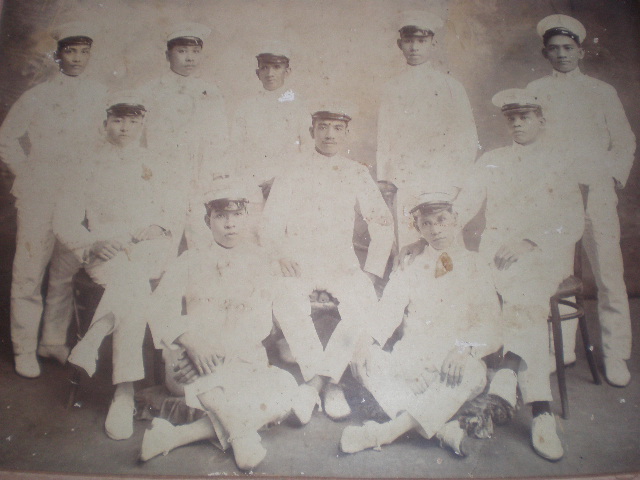 Ivan Evangelista, bottom left.
It’s clear that Filipino musicians found India an appealing destination. In 1926, the first recording of jazz made India, by a multinational band called Lequime’s Grand Hotel Orchestra, featured a Filipino trombone player named Nick Ampier. The next year, in 1927, a Filipino orchestra headed by a musician named Jimmie Little performed in several cities, including Delhi, Lahore and Mussoorie. In Bombay, they were booked for an engagement by the Yacht Club. “They work on the American style and have plenty of ‘pep and snap’,” The Times of India reported. It added, “Bombay, of course, likes something new.” 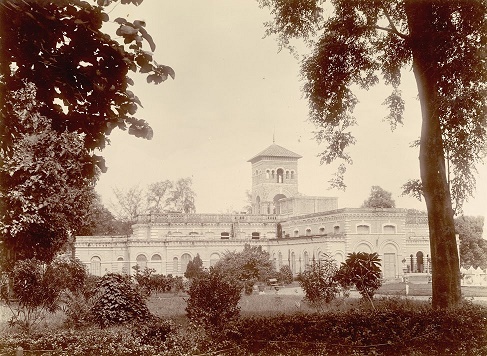 The Jamalpur Railway Institute, Wikimedia Commons
In 1938, Ivan Evangelista moved to the town of Jamalpur in Bihar’s Munger district, which was home to an East Indian Railway workshop that employed approximately 25,000 people. The town had an enormous Railway Institute, with its own movie theatre, a six-lane swimming pool, four tennis courts, two billiard rooms and a bowling lawn. The dances held there drew railway employees from across eastern India. Among the people who observed one of these gatherings, though long before Evangelista’s time, was the British writer Rudyard Kipling.

“Best and prettiest of the many good and pretty things in Jamalpur is the institute on a Saturday when the Volunteer Band is playing and the tennis courts are full and the babydom of Jamalpur – fat, sturdy children – frolic round the band-stand,” he wrote in his book From Sea to Sea. “The people dance –  but big as the institute is, it is getting too small for  their dances –  they act, they play billiards, they study their newspapers, they play cards and everything else, and they flirt in a sumptuous building, and in the hot weather the gallant apprentice ducks his friend in the big swimming-bath. Decidedly the railway folk make their lives pleasant.”

Ivan Evangelista’s band played in Jamalpur on Fridays.  “The rest of the week, the band travelled up and down the rail line for about 300 miles in either direction, playing the Anglo-Indian communities that ran the railway workshops (steel plants), stations (big ones, not like the little US railroad seen in the West in the old movies) and kept the tracks in good shape,” recalled Jim, another of his sons. 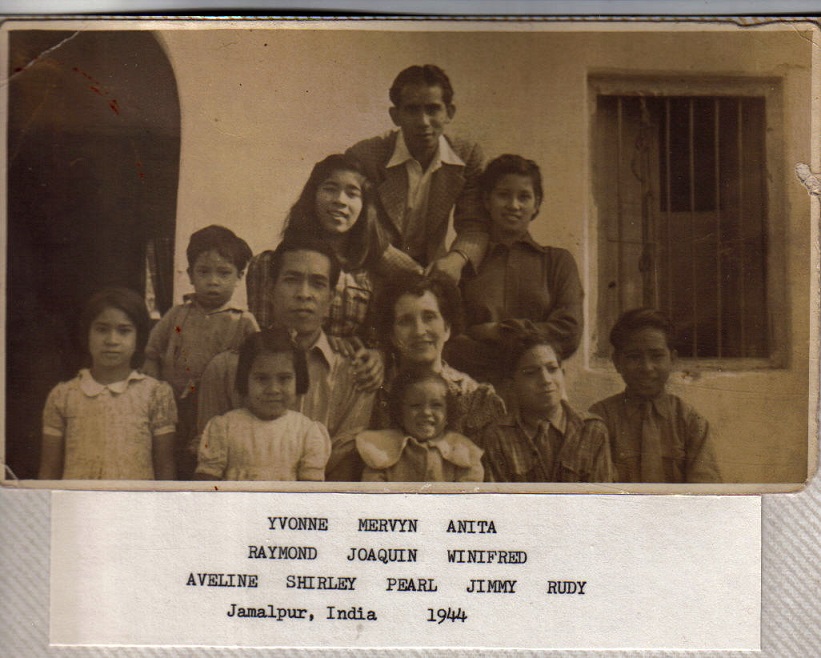 In 1926, Ivan Evangelista met Calcutta-born Winifred Mabel Henderson, who went on to play the ukulele and sing in his band. The couple had eight children and the list of their birthplaces gives a sense of how widely the couple travelled:  Rudolph and James were born in Lucknow, Aveline in Bombay, Shirley in Calcutta and Raymond in Jamalpur.  But, said Robert, “when Indian independence came, the gigs got scarce. With a big family, he had no choice but to leave and go back to the Philippines.” (Robert was born after his father came home.)

The family settled in Cabanatuan City in Nueva Ecija province, where Ivan Evangelista’s siblings had moved after the Japanese occupied their hometown during the Second World War. “It was very difficult for them,” Robert Evangelista said. “They lived in a hut in the beginning with a hole on the floor for toilets.” They had no money had had to rely on handouts from their relatives. “My father was a very proud man and the oldest,” Robert said. “He must have swallowed his pride in order for his family to live. I must believe that my dad had lived the good life playing gigs all across India (you know what I mean) It was hard for him, I bet.”

It was probably even more difficult for Ivan Evangelista’s wife, Winifred. “Obviously it was such a great culture shock,” Robert Evangelista said. In India, the family had thought of themselves as white. Back in their father’s homeland (and theirs), the children didn’t know the language. It was a struggle, but they made it.

Not all the children in that photo above went back to the Philippines immediately. Before Winifred Henderson married Ivan Evangelista, she’d been married to a drummer named Elino Francisco. His children, Anita and Mervyn, decided to stay behind in India, and they lived Calcutta until at least the mid-1950s. Mervyn Francisco was a drummer who played alongside “Jazzy” Joe Pereira in Walter Yashin’s band at the 300 Club and they cut a record together in 1954. After all the photos Robert Evangelista sent me, I was glad to be able to send him this image, of his step brother performing in Calcutta. 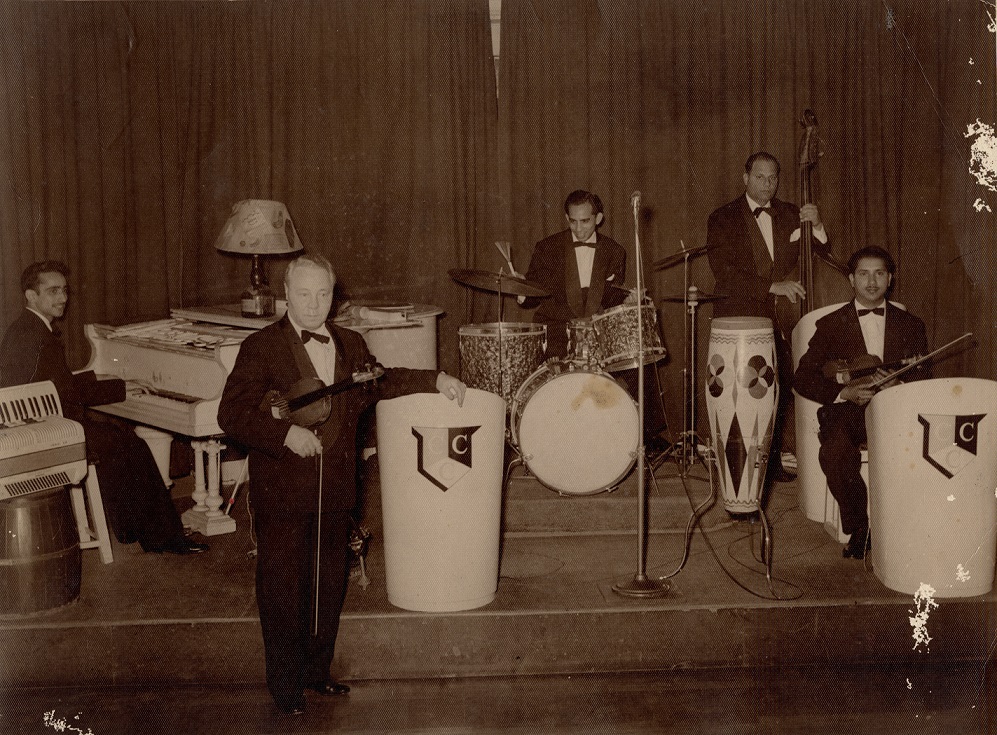 The story of Ganga River in Bihar from last 200 years

The Story of Beautiful Actress Neha Sharma From Bhagalpur, Bihar

The Story of the Mud Houses of Bihar

The story of the time, when education system has started in Bihar

Story: We invent a new religion to prove what we are!

The story of Language in Bihar