Her mehendi being given the final touches, Rinki was busy taking last minute lessons on a happy married life from her aunt when the gram pradhan reached home to bless the 15-year-old.

Visibly happy, the innocent teenager was cooperating with her parents in committing a crime that has taken lives of more than 9.5 lakh teenage mothers in the past decade. 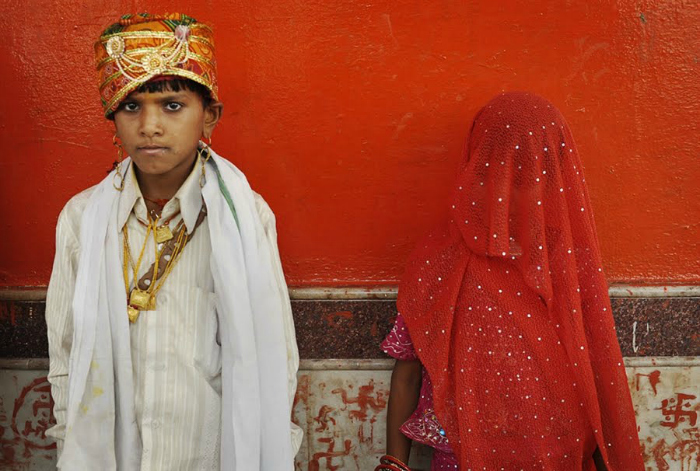 Rinki is among 8.32 crore girls across India who have got married before attaining legal age of 18. More than 16% of them conceived in the first year of their marriage itself and 7% of them or about 9.5 lakh succumbed to complications arising out of underage pregnancy. The problem is largely prevalent in 10 states including Uttar Pradesh, West Bengal, Andhra Pradesh, Bihar, Rajasthan, Maharashtra, Madhya Pradesh, Odissha, Tamil Nadu and Karnataka. UP alone accounts for 15 per cent of underage marriages, which highest in the country. 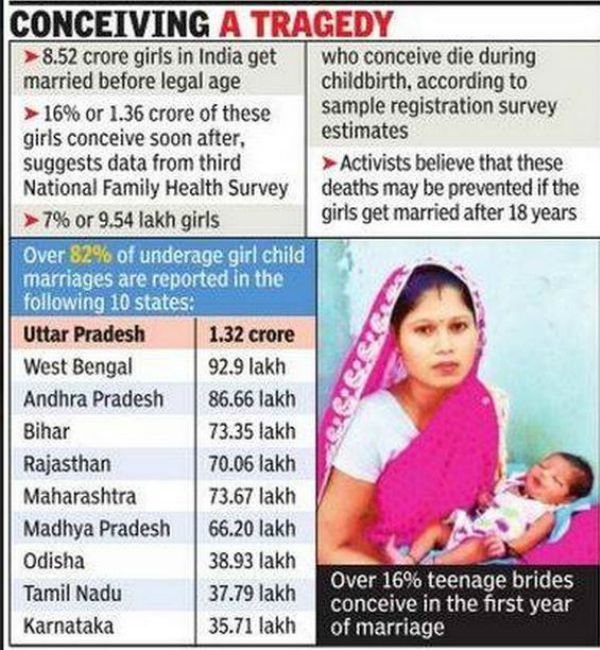 “Most girls are about 19.5 years by the time they deliver their baby which is almost two years short of ideal biological age for conception,” said Dr Neera Jain, general manager, maternal health, UP. Obstructed labour is the most common complication seen in teenage pregnancies. “This happens because the woman’s body has not matured enough to hold the baby for full term. In most cases, death is due to excessive loss of blood during child birth,” said Dr Smriti Agarwal, Queen Mary’s Hospital. Preeclampsia (high blood pressure and organ damage particularly kidneys) is the other life-threatening complication in such girls. The complications are aggravated further by problems like iron deficiency anaemia and malnutrition.

Besides the teenager, the matter also concerns babies (mostly underweight) who open their eyes to risk of infections. There is a risk of growth retardation, premature deliveries, intra-uterine death of the child, rupture of the membrane that bears the child (amnion) and infection.

Global agencies like World Health Organisation, Unicef, Save the Children see teenage marriages and subsequent pregnancies as violation of rights of two children — the teenaged girl and her baby. One may speak with any girl in any village randomly to conclude that ‘she wanted to study’.

In villages, there’s huge social and peer pressure in the village as far as marriage is concerned. “Teenage marriages are deeply associated with perceptions about menarche,” said health activist Dr Neelam Singh who undertook a qualitative research on the issue. “We found that rural folks see onset of menarche in terms of marriageability, sexuality and fertility. Things can change only if this notion is systematically altered through behavioural change strategies,” she said.

Social reasons particularly fear of girl falling to sexual crimes, gaps in education and poverty fuel the problem further. “It appears that the transference of responsibility of the girl child sets parents free from the biggest burden over their hearts. The process however takes toll on rights of the girl child which should be checked,” said Madhu Garg, secretary, All India Democratic Womens’ Association.

(Originally published in the Times of India)

Top 8 Reasons Why Bihar Girls Are The Best!

Why Dighwara in Bihar Is Teaching Boxing to Girls.!

A VOICE FROM THE HEARTS OF BROTHELS

What do Indian parents think about Casual Sex Before Marriage?