Bihar has the second highest crime rate and the lowest enrolment in secondary schools among poor states.

*Bihar has the lowest enrolment in secondary schools among poor states

*Bihar’s maternal mortality is the lowest among poor states

Bihar – India’s third-most populous state with as many people as the Philippines – is the focus of attention, as IndiaSpend reported in the first part of this series as its legislative assembly prepares for re-election soon.

We have seen how Bihar lags in terms of economic and infrastructure development.

Bihar has India’s lowest literacy rate, according to the 2011 census: 64% of Bihar’s 104 million people are literate, a rate lower than several, poor African countries, including Malawi, the two Congos and Sudan.

The Indian literacy rate is 74%.

Bihar’s gross enrolment ratio at the primary level (age 6-14; grade 1 to 8) is lower than 100, although education is now compulsory for all children aged six to 14. 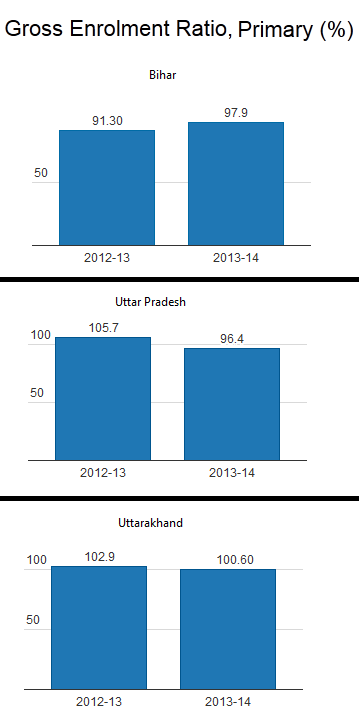 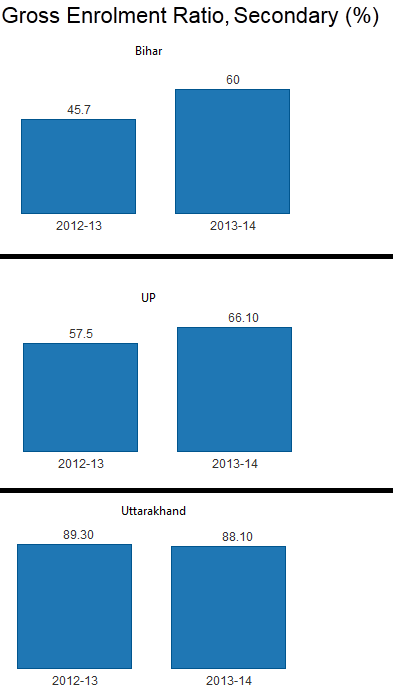 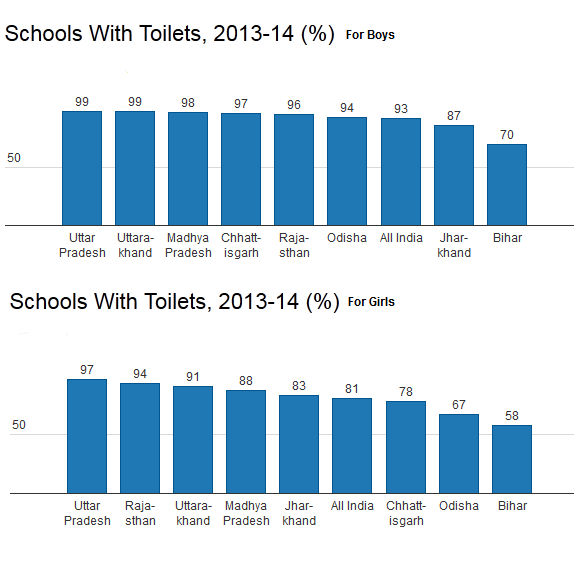 Source: District Information System for Education (primary) 2013-14; Figures in %
Only 58% schools in Bihar had separate toilets for girls in 2013-14. Drinking water was available only in 88% schools, the lowest among EAG states. Poor infrastructure is reportedly a major reason for low enrolment in schools, especially toilets.

Madhya Pradesh had the worst infant mortality rate in the country with 54 deaths per 1,000 live child births in 2013.

Despite its improvements, Bihar is still a distance from the worst-performing southern state Karnataka (31), Maharashtra (24), Gujarat (36) and a long way from Kerala (12).

Rural IMR continues to be a matter of concern at 42, while the urban number is 33.

A key reason for a lower death rate could be the improved use of oral-rehydration solution among children suffering from diarrhea. Other improvements include better vaccination against diphtheria, pertussis, tetanus and measles.

However, the state’s MMR is high compared to the national average of 178.

Law and Order Still A Concern In Bihar

Bihar has the second-highest crime rate among EAG states with 30. With 8.6% of India’s population, it accounted for 10% of violent crimes reported nationwide.

(Crime rate, defined as the number of offences per 100,000 population, is derived by first dividing the number of incidents in an area by the number of people living there, and then multiplying the resulting figure by 100,000, according to the National Crimes Record Bureau.) 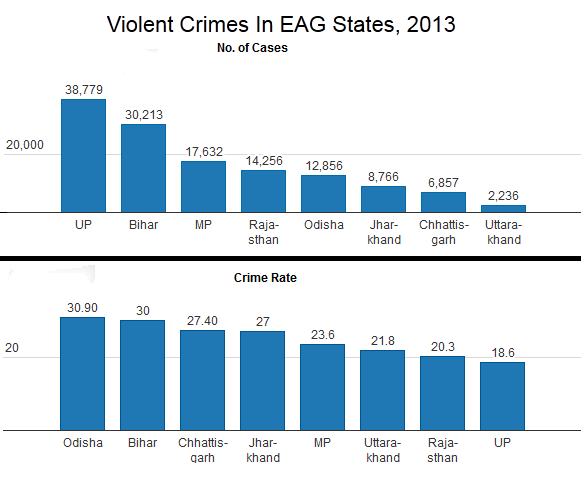 Source: National Crime Records Bureau; *crime rate is the no. of crimes committed against every 100,000 people
The crime rate in Bihar has gone up to 30.5 in 2013 from 25.1 in 2012. This could mean that more people are reporting crimes. 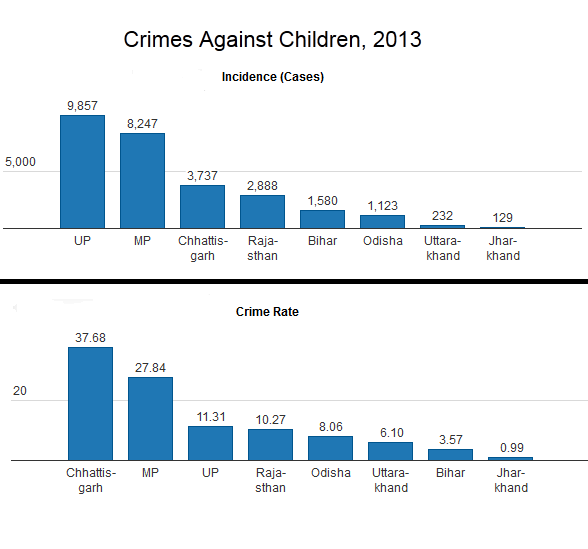 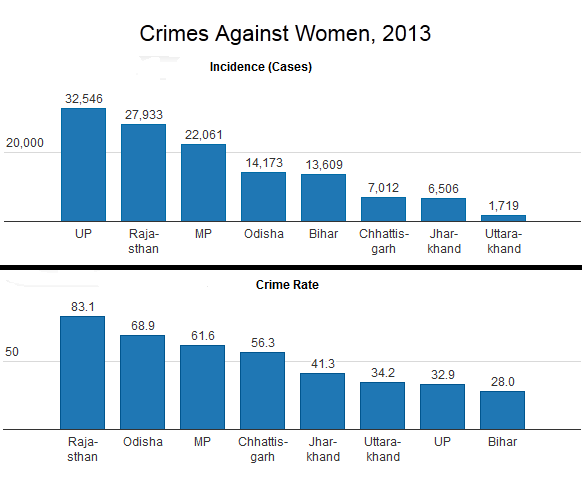 Source: National Crime Records Bureau; *crime rate is the no. of crimes committed against every 100,000 women
Bihar has the lowest crime rate against women: 28 per 100,000 women.The high population of Bihar (104 million, of which 49.8 million are women) could be one of the main reasons that crime rate is low compared to other poor states and the all-India level of 52.2.

With more than 13,600 cases, Bihar reported the fifth highest number of crimes against women among EAG states.

A caveat: NCRB data may not represent realities. IndiaSpend previously reported how crime and other data is fudged in neighbouring Uttar Pradesh.

This article was originally published on IndiaSpend.com, a data-driven and public-interest journalism non-profit.

Bihar is not in the top states of highest Crime Rate, report of NCRB

Not a Jungle Raj in Bihar: Crime in Bihar decreased by 1% from last year, Murders down by 11% in three years

Death of Education in some of the primary schools of Bihar

To what extent BEMARU Bihar is

The status of Women in Bihar : The uprising.